How Do You Properly Use Hydrogen Peroxide?

Float Tanks Solutions
Centers
1953 Hits
0 Comments
The Art of Floating, a great blog by the Float Shoppe here in Portland, has been answering questions that hit their inbox. Which is brilliant, and gives a second life to the extensive novellas on that minutiae of float tanks that I find myself writing daily. Here's the first in what will hopefully be a series. 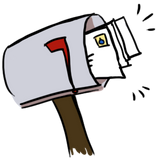 I have a few questions for you on peroxide use.  How do you use it? When do you use it and in what quantity do you use it in for floating ? Is there an amount per floater or number of floats or per day or by weight of floater?  I realize there are many factors but trying to get a sense for about 5 floaters a day/per tank. I've seen a few different notes on it but it's not really clear.

Any help would be super appreciated!

Good question - we use 35% Hydrogen Peroxide, which we order online. We do about 10 floats a day/tank, and we use around an average of 2-4 ounces per day per tank. That seems like a big range, and it's because the Hydrogen Peroxide can vary quite a bit in how quickly it is used up.

Always measure and record exactly how much you're putting in - you don't want to play around with estimation where concentrated chemicals are concerned.

My guess is that you'll need to add 1-2 ounces per day to each tank keep them at their proper levels. We use a LaMotte testing kit to test the water (we sent a water sample to LaMotte, and they verified that their H2O2 testing kit works with the Epsom Salt solution).

We keep our tanks at 80-100 ppm H2O2 (a bit higher than pools/spas for safe practice), and we test and dose 2-3 times a day to keep them in that range. With your own tanks and float schedule, you'll be able to hone in on how often you need to check to keep your levels consistent. We recommend never checking less than once a day.

35% H2O2 is extremely caustic, and it can burn and even blind you if it isn't handled with proper care. Always use chemical resistant gloves, and eye protection (I like lab goggles, both for style and protection). Also, make sure to rinse everything off that came in contact with the H2O2 (including the bottle itself) to prevent problems when you handle it next.

With the gloves, we've found that even thick, seemingly intense ones we will degrade and become permeated over time. Here's how different gloves stand up against H2O2. 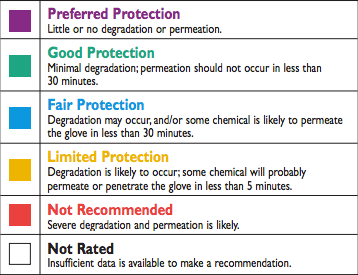 This chart, from Ansell, looks pretty good for any of them until you look at the key, which shows the 'Good' ones breaking down after 30 minutes of exposure. Keep in mind that these are for disposable gloves, so for thicker varieties it will take longer to degrade, but it will still happen. In addition, with more permanent gloves there is always the danger of improper cleaning, or of small amounts of hydrogen peroxide getting inside the glove.

If you keep using the same gloves over and over again, you'll get burned.

We've switched over from heavy duty gloves to using disposable, neoprene gloves, which leaves less room for issues.
Storage is important as well. We keep our hydrogen peroxide in a locked mini-fridge in our work room. This ensures that no one pulls it out and uses it by accident, and that it stays cold (which helps keep it from degrading in potency over time). I personally have found that it's important to obtain a second mini-fridge, so that your business partners don't make a habit of keeping beer in with the hydrogen peroxide.

Our lab tests using hydrogen peroxide have come back clean of common contaminants, and in general it is a good, easily measurable way to disinfect your float tanks without the use of bromine or chlorine (if your state and county health departments allow it, of course). Just make sure that you use the proper precautions, and that you measure and log everything.

Float Tank for sale in Toronto, ON hardly used